This project deals with an innovative rather an interesting manner of intimating the message to the people using a wireless electronic display board which is synchronized using the GSM technology. Notice board is primary thing in any institution or organization or public utility places like bus stops, railway stations or parks. But sending various notices day to day is a tedious process.
This paper deals with advanced notice board. This will help us in passing any message almost immediately without any delay just by sending a SMS which is better and more reliable than the old traditional way of pasting the message on notice board. This proposed technology can be used in many public places, malls or big buildings to enhance the security system and also make awareness of the emergency situations and avoid many dangers. Using various AT commands is used to display the message onto the display board. GSM technology is used to control the display board and for conveying the information through a message sent from authenticated user.

Tribe is a shared connection point for the entire family. It’s both a wireless music system and a communication Hub: a new generation of portable connected speaker made for the kitchen, where family life happens. Triby is for busy families who want to stay connected throughout the day with easy hands-free phone calls. Bright and Luminous Blue for a pop addition to your kitchen.

AvaLAN Wireless, leaders in secure, fail-proof wireless connectivity, today announced the availability of their new remote solar power kits. These Remote Power Kits are designed for applications where power is needed but unavailable.

The solar panel kits are complete systems that include the electronics and solar panels and mounting accessories. The Powder Coated Aluminum NEMA 4X-IP65 rated, lockable enclosure has space inside for batteries, cables and controls, and plenty of extra space for electronic equipment.

Electronic equipment inside enclosures includes a DIN rail with breakers, terminal blocks (for easy termination of cables & power/output accessories), cables, and an advanced or MPPT charge controller to protect against overcharging or over discharging batteries.

With the new message centers, advertisers can customize and deliver messages with greater frequency to customers waiting in lift lines and basic areas by sponsoring reports that can be instantly updated by ski on trails, traffic, weather, safety, and special events and provide other timely information.

Making his debut in the 2006-07 ski season in the stations nationwide, this large screen color signs that work with calendar software connected to the Internet can display text messages, and logos LED video animation, and are easily seen in direct sunlight and at great distances.

The first advertisers for the centers include Slim Jim, Mini Babybel cheese Bel Group and General Motors ConAngra Snack Foods of the Chevrolet division, with others in the negotiations.

“The message centers do day to communicate to customers or dry erase blackboards to lift a thing of the past,” said Monte Rios, president and CEO of Sitour USA. “This creates enormous opportunities for national and local advertisers as well to really reach the attractive demographics of skiers and snowboarders, who are rich, educated, active, health conscious and committed to the sport. “

The new signs will be installed in Sitour over 80 stations across the country this year, after the successful test facilities. Wintergreen Resort in Virginia is the first US mountain install a complete system covering all areas lift lines, tubing and base.

Using technology similar to that employed by the New York State Lottery to update its bulletin boards, ski resort operators can update messages about impending snowstorm, updates traffic for the return trip, trail closures, missing children reports and even sports scores busy day skiing as Super Bowl Sunday that skiers do not have to leave the tracks to see what happens.

Each message center will generate 1.5 million impressions per ad / season. The messages are repeated in the waiting model-based cycles on lifting lines for multiple and lasting impressions.

individual signs in the system can be personalized with messages tailored to achieve the desired demographic; for example, placing ads geared toward parents in the children’s ski area or those for entertainment or dinner near the main lodge.

“The message centers create a highly visible and effective marketing tool to promote current and future events and other activities in the mountains,” said Anthony Lanza, Superintendent Belleayre Mountain in the region of New York Catskills. “The graphics really get the attention of our clients. Targeted impressions we receive from the wireless LED reader boards Sitour offer the best value in advertising. “

Sitour brings a long history of innovating on advertising on the snow, starting with inventing the concept track map over 40 years ago. Since then, he has introduced cards scenic trails and the first advertising packages ski resorts built in the 1980s, multi-purpose ski and snowboard shows in the 1990s and the vertical tower and announcements Wireless LED message centers in the 2000s

Sitour USA is a leader in advertising and event promotions to skiers and snowboarders, offering advertisers placements media at 215 stations in many major ski areas in North America and an international network of 900 stations in 11 countries. Sitour reached 70 percent of total market skier visits with advertisements that offer complete saturation both on the mountains and inside the resort lodges. Its customers include General Motors, Dannon, Kraft Foods and other Fortune 500 companies as well as large national and regional companies.

In the highly competitive food service industry, restaurants are increasingly turning to high-tech tools to improve service and attract more customers. Once again, HME Wireless leads the way with its new Restaurant Paging App Suite. Designed for use with iOS and Android devices, these innovative tools give busy restaurants a complete guest, server, and table status system in one easy-to-use paging app suite.

“Mobile devices are being deployed across almost every industry today with no exception in hospitality,” says Russ Ford, VP of HME Wireless. “We are seeing tablets used to order food at the table, guests taking surveys and playing games on smart phones, digital menu boards and even entire POS systems running on mobile and cloud-based systems. Our new app suite gives restaurants a simple yet sophisticated tool for building sales and increasing guest satisfaction.”


GuestCall enables staff to track wait times, page waiting guests or other needed staff members, as well as get detailed reporting on many aspects of restaurant operations.

“The app suite only needs one transmitter, the iStation, and works with all HME Wireless pagers for seamless integration with a restaurant’s current system,” adds Ford. “And you can download the whole suite or just the individual applications you need. At HME, we strive to help restaurants operate more efficiently and profitably, and our new app suite takes a giant step in that direction.”

For more information on the Restaurant Paging App Suite or on wireless paging systems, visit http://www.hmewireless.com or call 1-866-611-4202.

HME Wireless (formerly NTN Wireless) is an innovative technology company offering a complete line of on-site messaging solutions to improve efficiency and customer service for businesses worldwide. Restaurants, hospitals, church nurseries and retail stores are just a few that use our systems to increase sales, productivity and customer satisfaction. HME Wireless is a subsidiary of HM Electronics, Inc. To learn more, visit http://www.hmewireless.com.

http://www.mtechprojects.com – The microcontroller receives the message from transmitter through GSM interface to be displayed on the LCD at user end interfa…
Video Rating: 1 / 5 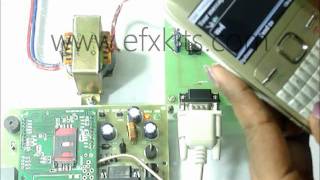 This draft EdgeFX explains the operation of a wireless display panel using a GSM modem that displays the message sent by the mobile phone users. http: … //www.e
Video Rating: 4/5

BlueBoard iRig is the first MIDI Foot Wireless iPhone, iPad, iPod touch and Mac which uses Bluetooth technology to transmit MIDI messages the application of control functions and software and features. Musicians can use iRig BlueBoard to control parameters in their music making favorite applications – such as effects pedals on / off, preset patch-the-fly switching, volume or wah control, or any other MIDI controllable function. Installation is as simple as powering up and application launch companion iRig BlueBoard and assignment pads against the light to the function you want command.

iRig BlueBoard uses 4.0 (LE – Low Consumption) technology Bluetooth to transmit the actions of its four switches on board, backlit and its two optional external devices to the mobile device or Mac. Then, using the iRig BlueBoard Application (download from the App StoreSM) and the software (download from the website user’s region IK), Bluetooth signals are converted into MIDI messages and routed internally music application which is running on the device.

Any music application or Mac application compatible music software (the standard communication protocol for musical instruments) MIDI – IK as AmpliTube, VocaLive, SampleTank, iLectric Piano, Piano iGrand – or any other Core MIDI-compliant Apple GarageBand application as may be controlled wirelessly. iRig BlueBoard is also extensible – musicians can add up to two pedals or pedals additional term standards via two TRS 1/4 of the unit “made expansion, which allows you to control functions such as continuous rotation wah, volume, EQ, gain control, etc.

For a guitarist or singer using a mobile multi-FX app like AmpliTube or VocaLive as a sound processor provides functionality iRig BlueBoard foot control and convenience of a pedal, but with a compact form factor if and portable that it can easily slip into a backpack, a laptop or camera body computer bag.

Because it is wireless, iRig BlueBoard puts musicians on stage without being tethered to their mobile device. The range of the device is 10 meters (over 32 feet), giving players a high mobility to travel the stadium that would be impossible with a wired device. Because the pedals are backlit, they are easy to see in all lighting conditions, even on a dark stage.

The fact that iRig BlueBoard uses wireless Bluetooth lets all wired ports free device, so they can be used simultaneously by interfaces or controllers that have 30 pins or lightning, as iRig IK PRO , HD iRig, iRig MIDI and iRig KEYS and adapters or microphones that use the mini-jack device like iRig, iRig Mic iRig PRE or.

iRig BlueBoard is extremely compact, lightweight and portable, measuring only 27 inches wide x 9 inches deep (10.6 “x 3.5”) and only 2 cm (0.8 “) high. This is very light but with a solid chassis and four pedals stageworthy soft touch rubber and designed for durability.

As with other accessories IK iRig BlueBoard is made in Italy at the plant of IK for the highest quality and reliability.

iRig BlueBoard is priced at $ 99.99 / € 79.99 MSRP (excluding taxes) and is available now from the network IK music and electronic retailers worldwide and from the IK online store.

The Digital Screenmedia Association and KORE will host the Webinar “Digital Signage Goes Wireless” on July 15, 2014 at 2:00 ET to address the growing and critical trend of managing digital signage networks through wireless connectivity.

In today’s ‘must have it now’ customer experience world, the need for customizable digital signage solutions is essential. Altering messaging in real-time, adding advertising, acting on customer input, deploying signage globally, and remotely monitoring your equipment requires forethought, planning and reliable connectivity. The webinar will focus on the following topics:

Attendees will gain insight into the current and future landscape of digital signage management and will understand the importance of thinking globally with wireless connectivity to deliver the optimal customer experience.

Attendees can register at the Digital Screenmedia Association’s website.

About the Digital Screenmedia Association

The DSA is an independent, non-profit association, whose mission is to advance the growth and excellence of the global digital signage, interactive kiosk, and mobile community through advocacy, education and networking. Members include users of digital screenmedia in all vertical markets including retail, hospitality, food service, and healthcare, as well as manufacturers, resellers, and distributors of hardware and software, network operators, integrators, advertising agencies, consultants, analysts, publishers, trade show organizers, and service companies.