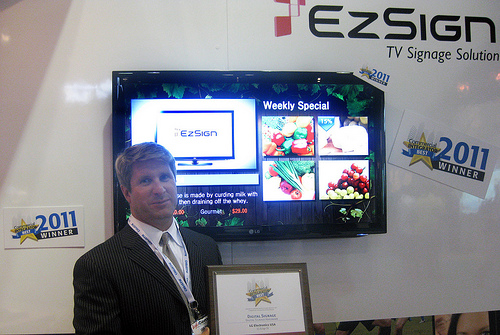 Image by Mulad
I guess Rochester didn’t want to be left out when Minneapolis got its big Marq2 project set up downtown. These bus stops include digital signage to show when the next bus is expected.

Image by Anirudh Koul
Dave Stevens, General Manager of MySpace Canada at the eConcordia Summit 2009 in Montreal on September 10th, 2009.

Topic: “Cybercommunity, how it has effected socialization?”

Until the recent centralization of North American operations, Stevens served as the General Manager at MySpace Canada where he oversaw the operations and strategy for Canada’s premiere social media lifestyle portal serving advertisers with unique advertising solutions to reach consumers. Prior to MySpace, Stevens served in a dual role as General Manager of dose.ca and VP, Product Management and Strategy for canada.com. At dose.ca Stevens was responsible for all facets of marketing, content, operations and strategy that led to increased revenues and engagement. As VP, Product Management and Strategy for canada.com he was responsible for business development and product management for emerging media platforms including mobile, IPTV and digital signage.

Before joining CanWest, Stevens spent nearly four years at AOL Canada as Senior Manager of Content and Sales Strategy. There, he helped build the entertainment and music channels by bringing world exclusives to Canada. Stevens has an impressive background in television – at Rogers Television he was responsible for programming throughout Ontario, and built out flagship programming for OHL Hockey.

Prior to joining Rogers, Stevens was involved in the start up of Country Music Television (CMT) in Canada where he produced more than 30 concerts and live programs, including CMT’s first live nationwide event. Stevens received a Bachelor of Applied Arts degree in Radio and Television Arts from Ryerson University. He is an avid hockey fan and a self proclaimed pop culture aficionado.

Check out our blog post at https://jumpcloud.com/blog/ldap-integration-cloud-directory/ for more information on LDAP Integration with a Cloud Directory through JumpCloud®.

LDAP-as-a-Service was born from the difficulty that is the implementation, maintenance, and leveraging of LDAP in modern organizations. The connection of cloud-based servers to an on-prem LDAP directory is notoriously complicated and stress-inducing. This is where JumpCloud enters to assist enterprises in implementing this alongside a cloud directory. JumpCloud’s SaaS-based solution takes away the grunt work of setup and configuration that comes with an LDAP server and instead hands you the end result in a neat package. Our solution delivers a cloud-based LDAP within its core features. Authentication and authorization via the LDAP protocol allows for ease of access and dedicated monitoring. This ultimately relieves your system admins from the ungainly chore that is associated with implementing, maintaining, and monitoring LDAP in the modern cloud-based workplace.

“I believe that the next generation of LDAP and AD is going to be Directory-as-a-Service” – Tim Howes, Co-Inventor of LDAP

Video Transcription:
Do you use apps like Atlassian JIRA or Confluence, or any app that can use LDAP directly to authenticate and provision users? JumpCloud offers LDAP-as-a-Service as a core feature of its directory. Forget about installing, configuring, and managing an LDAP server day-to-day ever again. JumpCloud DaaS does this for you all through this LDAP service. Just configure your apps to your own private LDAP instance, like you would as if the server was in your own rack. 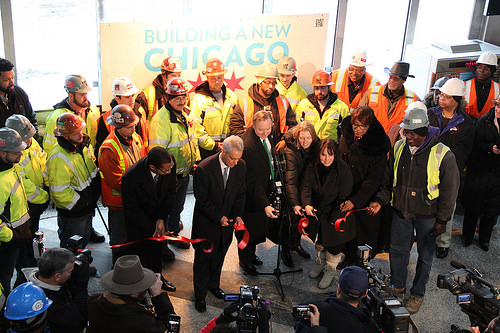 Image by cta web
An opening ceremony was held by Chicago Mayor Rahm Emanuel and CTA President Forrest Claypool earlier today to celebrate the opening of the brand new Cermak-McCormick Place station on the Green Line! This new station serves McCormick Place, the growing area near historic Motor Row and provide a crucial additional transportation option for the Near South Side.

The station, with entrances on both sides of Cermak and at 23rd Street has two elevators, an island platform (featuring full canopy coverage, heaters, and benches), bright lighting, security cameras, new static and digital signage, a Divvy station and plenty of bicycle parking.

The station also has art in the form of eight, 4’x12′ panels by Bronzeville-native artist Hebru Brantley who casts his own comic book-style characters to celebrate the nearby Motor Row Lankmark District. Motor Row once had the nation’s largest concentration of car dealerships and was also home to the Chess Records recording studio and the Chicago Defender newspaper.

The new station, part of billion in transit investments announced by Mayor Emanuel since 2011, is located near the intersection of Cermak Road and State Street will provide much-needed access to rapid transit for Near South Side residents and businesses. It fills in a major gap in CTA service that has existed in the 2.5 mile stretch between Roosevelt and 35th/IIT stations since the previous Cermak station at that location was demolished in 1977.